This article describes the approach taken to producing information models, including ; what they are, what their purpose is, and what the technical components of the models are.

The article does not include the content of any particular model.

What is the Discovery health information model (IM)?

The IM is a representation of the meaning and structure of data held in the electronic records of the health and social care sector, together with libraries of query, extract and mappings.

It is an abstract logical model, not a physical structure or schema. As a logical model it models data that may be physically held any a variety of different types of data stores, including relational or graph data stores. Because the model is independent of the physical schemas, the model itself has to be interoperable and without any proprietary lock in.

The IM is a broad model that integrates a set of different approaches to modelling using a common vocabulary. The components of the model are:

The remainder of this article considers how models and ontologies can be constructed using this approach.

For example, an encounter may be defined as an "interaction between a patient (or on behalf of the patient) and a health professional or health provider". The definition of an encounter with Description logic as a subclass with some properties can be produced using the open world OWL2 grammar.

However, an encounter can also be said to be a type of entry in a health record, as modelled in FHIR or openEHR. From this perspective an encounter will be defined as a logical 'schema' with a set of properties such as a date or encounter type.

The two disciplines (Description logic and data model constraints) are different, but they are obviously related. The binding between a data model and the range of values that should be applied to a property blurs the boundary between one and the other. This boundary is artificial and historical and harmonising the two into a single holistic whole enables very flexible storage database designs.

Because ontologies use inheritance and entailment as their main approach to definitions this also enables simple hierarchical approaches to data models. Instead of everyone having to make the same choice between having an encounter table or consultation table, or A&E attendance table, a system can be designed to suit, for example having a single high level table such as an event table, or a small number of core tables with extensions, or a complete library of tables, or no tables at all. A map between the information model and the chosen schema is all that is needed.
Benefits of harmonisation accrue in user interfaces. For example, is a user elects to search for a systolic blood pressure, if the application uses the information model it knows that a systolic blood pressure is held as a concept which is a value set of the concept property in an observation and can automatically produce the related properties such as data and value 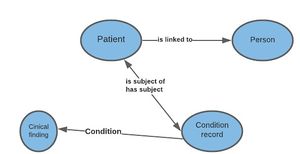 Types of data as a graph

The data in a health record stored can be conceptualised as a set of relationships between one thing and many others.

Some people call this a graph. Others call these objects , properties and values. From a grammatical language perspective they are subjects, predicates and objects.

The example on the right is entirely arbitrary but illustrates a problem. What does "condition record" mean, or indeed what is a "condition"? Why is a patient linked to a person and what does "linked to" mean?

The answer is that the "terms" or "concepts" used in a model should be derived from a vocabulary whose terms have meaning and are formally defined. Some terms have meaning in whatever context they are used whereas others have different meanings in different contexts. In defining terms, it is necessary to defined them precisely enough for a computer to interpret the meaning safely i.e. the context of an idea is part of the idea itself.

The most difficult challenge is to agree the definition and meaning of the concepts in the context they are used. The agreement as to a particular model is less important. A definition defines a concept in relation to other concepts. Within a domain of interest such as healthcare, all concepts are indirectly related in some way to all other concepts in that domain.

The crucial step in the discovery approach is to apply this principle to both the things that are being recorded (such as clinical concepts), as well as the structure of entries in records themselves.

The consequence of this approach is that W3C web standards can be used such as the use of Resource Descriptor Framework or RDF. This sees the world as a set of triples (subject/ predicate/ object) with some things named and somethings anonymous. Systems that adopt this approach can exchange data in a way that the semantics can be preserved. Whilst RDF is an incredibly arcane language at a machine level, the things it can describe can be very intuitive when represented visually. In other words the Information modelling approach involves an RDF Graph.

However RDF has no inherent semantics or schematics. To bring those in the model uses the semantic web languages of RDFS, OWL2 DL and SHACL as its main languages with SPARQL as its query representation. It incorporates ontologies such as Snomed-CT and W3C-PROV.

It is recognised that other languages are in common use. Consequently mappings are constructed to enable the model to be used. For example the Snomed-CT expression constraint language is a common way of defining concept sets. ECL is logically equivalent to a closed world query on an open world OWL ontology. The IM language uses the semantic language of SPARQL together with entailment to model ECL but ECL can be exported or used as input as an alternative.

which describes the current mapping and approach to mappings of codes or text, in context from publisher systems.

For a web application or set of APIs to be useful there has to be at least one service. There is a free to use information model service, i.e. an operational service that provides access to one or more information models.

The service provides a set of APIs as well as provide instances of the model for implementations to use directly should they wish to.

All implementation code including the evolving service, APIs, language grammars and object models are also available on Github in the following repositories:

A viewer of the information model and an early version of the manager is at: