The mappings package is one of the 5 main component categories in the information model.

The data map APIs are a set of APIs provided by the information model server to aid with the transfer of data between two data sets, where the source and target data sets conform to a data model. Either the source or the destination data models (or both) may be implemented as either relational or graph or both.

The extent to which these are used by a transform module is determined by the degree of knowledge already built into a transform, and the nature of the transformation software. It may simply be used as a human readable documentation. It may be used to enhance a current transform. It may also be used to drive a generic transformation engine.

Background and use cases

The Discovery information model supports a consistent approach to the presentation of maps using a mapping syntax heavily influenced by the W3C R23ML language and the ORM JPA approach as used by open source systems such as Hibernate.

The use of a mapping server enables the separation of concern between the maintenance of data maps themselves and the applications that transform data. As well as the technical separation it separates the business of map production from the business of transformation.

The mapping server can be used by a transform module operating as a client via the mapping APIs.

The main challenge in transforming data, is not so much the software, as the knowledge of what maps to what and how. This knowledge usually resides in the domain of informatics. The conventional approach of writing down this knowledge in documents or spreadsheets is helpful but insufficient. Instead it would be much better if this knowledge was presented in both a machine readable and human readable form. Even better, if the mappings can be used to parameterise a generic mapping application.

There are many different mapping techniques in operation. In particular object relational mapping tools based on this separation already exist and there are a scattering of standards in this area. Thus, The approach in the Discovery mapping service draws on the ideas inherent in the W3C R2RML and ORM open source systems such as Hibernate.

The APIs are designed to be used as an assistance to a code based ORM like transform, and can thus be used for some or all of the process, depending on the requirements of the transform client. In other words, the use of the APIs is a pick and mix approach, making it possible to introduce it into currently operating transformations without disruption.

The above correspond to the 3 main APIs: Get map, Get mapped property, and get Mapped value.

Use of the two mapping APIs

There are 3 main uses of the get map API:

The different approaches to the above maps is designed to address the problem of object relational impedance mismatch which is the problem of moving to and from rows/columns to types/subtypes;/properties.

The main use of the Get mapped property API is for assigning the common data model properties when processing legacy data from non standard sources.

There is one main use of the Get mapped value API which is for a codeable value in the source (e.g. a code or text), when taken together with the context of that value, obtain the common information model target concept (or code). 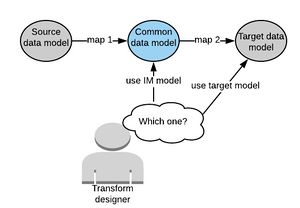 Discovery maps from a source only to the common information model's data model, and from the common data model to a target i.e. two mapping steps, often combined into one from the client perspective.

The benefit of this approach is that only one outbound map is required for each type of target (map from the common model) and only one inbound map for each source (map to the common model). The common data model acts as the hub that can "clean" and organise the data in a standardised way.

This approach also enables mapping clients to make use of either or both mapping steps separately or grouped depending on the use case. For example, currently implemented mapping process that map to and from FHIR, may only require a few additional IM facilities, such as what to do with new provider fields and what to put in a generic FHIR name/ value pair extension.

Context is used by the server in two ways:

Context is used by the client in order to short cut requests via the API. Having first defined context, it is then presented by the mapping server as a token for use by the the client, to enable re-use of the same context as a short cut to improved performance and to make coding easier. The context token is then an exchange token that tells the mapping server that a particular map request is operating within a particular context. Alternatively the client could send enough information each time to the server to provide the context for a map, so in this sense the context token is a convenience rather than a necessity.

There are two ways for the client to handle context:

Client provided context may use some or all of the full context information depending on whether the client knows the mapping server's mapping rules. For example, every GP practice using an EMIS Web system has the same context for all observations (as every EMIS GP system uses the same table structure. Thus the client does not need to send in the provider ID. However, if in doubt this can be sent in, as the mapping server will know to ignore it.

If the client knows the context the request could be as follows:

The underlying approach to authoring the maps themselves is described in the article Map maker manager which describes the fundamental concepts involved in making the maps for the server to deliver.

One of the two main map APIs involves requesting a map for the purposes of mapping from a source schema to a target schema.

The request - response exchange involves the use of JSON or XML conforming to the mapping syntaxe which is a subset of the the information model language. JSON or token based syntax is supported.

A request instance, like all the information model content, conforms to a subset of a single overarching modelling language. Thus a mapping document is both human and machine readable. I

The mapping server contains a repository of Maps, generated by the map server from a set of map nodes previously authored by a map maker. 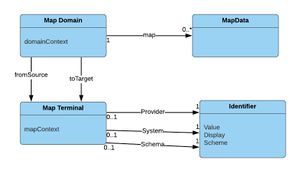 A map request is a request for map between a source schema and target schema. The combination of source description, mapping process and target definition for a full schema can be referred to as a map domain.

A mapping request contains both source context and target context. If no target context is included, it is assumed that the target is the core information model.

If the client knows the map context it simply needs to pass in the source and target context as part of the request.

The only difference in syntax between Object to object mapping and relational to object/ relational mapping is the terminology used. Tables columns, joins foreign keys, versus objects and properties and relationships.

In this example the client is requesting the map for a particular column from an admitted patient care column. The client already knows the context identifier for the schema and the table.

This API returns a target value from a source value set in the context of a source provider source system, schema, table/class, field or property.

Typically this might be used by a transform client when ascertaining what to do with unknown source values that have not part of the mapping domain. Typically this is used when new codes are required or where the value is from a legacy classification or text.

In this example the client is seeking the mapped value for a field value of 1. The term is unknown (i.e. is not in a look up table from the source)

Sometimes, when mapping text or a value, it is necessary to provide additional context from another field.

For example, in a source system, the word 'negative, a value of the field 'result text' associated with a code value '12345', a value in the field 'test', which is a field of the table of 'clinical events', used by the system 'Cerner Millennium', in the hospital 'Barts NHS trust', may mean something completely different to 'negative' with the code '12345' set in another hospital, even with the same system.

In this case a dependent field value is sent with the value nested within the dependent field. In this example the mapping client is seeking the concept to represent a "positive" result for a test code.

A data map uses a set of clauses in the order of CREATE FROM , WHERE which indicate that an object or property should be created from a source table or field, with perhaps with some other criteria, the transform will either create an object, property or relationship or reference an object already created previously in another process.

Many maps are simple one to one maps. However, the following example shows a part of a map that takes a flat CDS table row and creates two encounters, one of which is a sub-encounter to the other.

To walk through the above example, a set of instructions:

From the table "cds_inpatient", create an object of the class "hospital inpatient entry" (which is a sub class of encounter) object , assign to variable @inpatient

From the field "spell_number", : 1. Create an object of class "hospital inpatient admission" (which is also a subclass of encounter) assign variable @admission

2. Create a relationship 'subcomponent of,' linking to the @inpatient object

3. From the field 'administrative_category_code' create property of adminCategoryOnAdmission (noting the context)