This section explains the internal dashboards used to monitor data flows in to and out of DDS. The dashboards have been built into an application called DDS-UI which, in addition to the dashboards, provides many back-end DDS management utilities, such as those for setting up new publisher feeds.

The DDS-UI dashboards monitor the majority of DDS components that are responsible for the processing of published data, transforming raw data into the standardised FHIR-based intermediary model, and then transforming again for the individual subscriber databases. The dashboards cover almost every element of this data flow, although there are currently some exceptions to this, explained in the Exceptions section.

This section does not include:

The DDS is made up of a large number of applications, running on many individual servers, interacting with many databases, all with different purposes. Due to this wide range of components, multiple dashboards have been implemented, to each monitor a specific part of the DDS.

This diagram shows a high-level component-based diagram of the DDS (only including components related to the processing of data).

Each box represents one or more instances of an application, API or process.

Some of the major DDS databases are also shown.

The following sections describe each dashboard, and provide a similar diagram, highlighting the components that the specific dashboard monitors.

The Publishers page shows the current state of each discrete publishing service to DDS, irrespective of how their data is published. It shows details on when data was last published to DDS and the progress of the inbound transform (raw data to FHIR record store) for each one.

The primary use for this dashboard, from a monitoring perspective, is to detect services where no data has been received into DDS. The page is also used in the set up and configuration of DDS publishers, and controlling how published data is routed through the parallel processing queues.

The Publisher Errors page displays details of any DDS publisher feeds where the inbound transform (raw data to FHIR record store) has encountered some kind of fatal error.

The primary purpose, from the monitoring perspective, is to display those services and provide a quick way to view the specific errors. The page also provides functionality for re-queueing data for inbound processing, once whatever issue has caused the error has been rectified.

The Subscribers page provides a summary view of both inbound (raw to FHIR store) and outbound (FHIR to subscriber CSV format) processing. Although it does not directly monitor the Information Model or UPRN APIs, these APIs are indirectly monitored due to the Queue Readers dependency on them – any issues with the API would be evident on this page.

Each separate subscriber feed is represented as a row, with various counts to show the progress/state of the published data for that subscriber. Any feed with publishers in error, or with significant delays in processing (either inbound or outbound) are highlighted with clear warning labels.

Clicking on a specific subscriber feed will display a detailed view, showing details about each publisher to that subscriber.

The Queue Readers page shows detail on the RabbitMQ queues and Queue Reader applications that are responsible for the inbound and outbound processing. Although it does not directly monitor the Information Model or UPRN APIs, these APIs are indirectly monitored due to the Queue Readers dependency on them – any issues with the API would be evident on this page.

Unlike the previous dashboards, this page is not oriented around DDS publishers or subscribers, but around the applications themselves. The page a grid of cells, with each cell representing a queue and Queue Reader application. The dashboard shows a clear warning if any queue is not being served by an application, for example if the application crashed or was not started, and also provides a view of current activity within the queues and Queue Readers.

It shows a per-minute count of API calls and any errors that have happened. It also will highlight any sustained period of API inactivity since the API should always be called multiple times a minute.

The HL7 Receiver page shows the status of HL7 Receiver application, which is responsible for receiving HL7v2 ADT messages over MLLP connections, then sending that received data into DDS.

The page shows each MLLP inbound feed as a separate horizontal record, and two columns within each record, showing:

In addition, this page has functionality to temporarily pause the posting of new HL7v2 messages into the Messaging API. This allows the HL7 Receiver application to continue receiving messages from hospital trusts but suspends the onwards processing. This feature may rarely be used when the Messaging API is under maintenance.

The SFTP Reader page displays the status of the SFTP Reader application, which is responsible for receiving all flat-file published data into DDS (most of which is via SFTP, but not all).

Each separate feed into the SFTP Reader application (which may contain data for up to fifty separate services) is displayed as a record on this page. For each feed, there are four columns displayed: 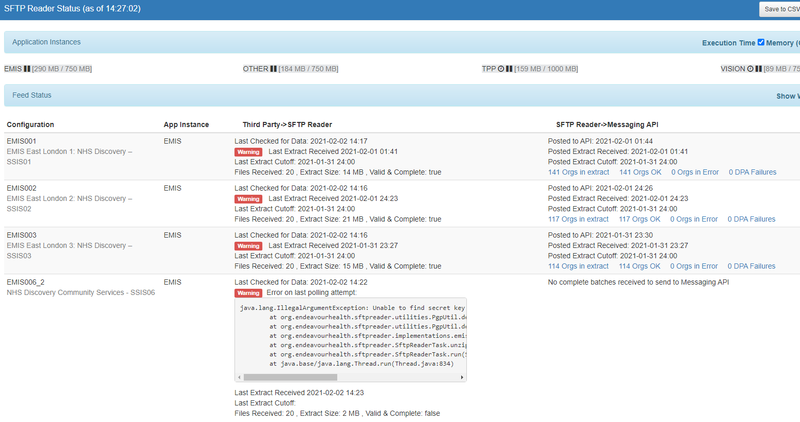 The Scheduled Tasks page is a general-purpose dashboard for monitoring any regular/repeating tasks or processes performed to support the DDS processing, but not directly part of the processing pipeline itself.

This page lists each task, when it was last performed, when it is next due, and will highlight any task not performed when it is due or that went into error when last performed. Examples of these tasks are the uploading of ONS postcode data into DDS, and copying of new TPP and EMIS local codes into the Information Model database.

There are a number of aspects of the DDS pipeline that are not monitored with dashboards in the DDS-UI application.